Vestal Goodman was born in the rich Gospel Music tradition around Sand Mountain, Alabama. She began singing as a child in church. Vestal had a soft singing voice as a young lady, but one night she had to sing without a PA system. Vestal suddenly found the new strong powerful voice that God had given her.

As a young girl, Vestal changed the spelling of her first name to ďVestelĒ after a teacher insisted on pronouncing it ďVes-tale.Ē She used this spelling early in her career as a singer before reverting to Vestal.

In 1949, Vestalís brother, Cat Freeman, who was a well-known tenor singer by that point, introduced her to Howard ďHappyĒ Goodman. The two were eventually married.

The couple sang with Howardís brothers Sam and Rusty for many years at The Happy Goodman Family. Vestal was known in those years for her towering hair and for carrying a white handkerchief. Years later when the Southern Gospel Music Association was raising funds, they created a doll in the likeness of Vestal that included the signature handkerchief.

Vestal and Howard left The Happy Goodmans in 1980, leaving it to Sam and Rusty, who continued for a few years. The couple returned to the recording studio with Johnny Minick during the 1990s and made several more recordings billed as The Happy Goodmans.

Vestal and Howard were regularly seen on video as part of the Gaither Homecoming from the time it launched in 1991 until their deaths. Vestal also recorded several solo and duet projects over the years. 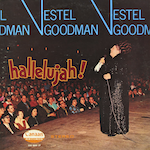 hi-res
1971 Hallelujah! (Canaan Records/CAS-9696): If God Is Dead; Jesus Take A Hold; Reach Out To Jesus; Who Am I; Searching; Clinging To A Saving Hand; Till The Storm Passes By; Teach Me Thy Way; In The Sweet By And By; It'll All Be Over But The Shoutin.

1998 ...Moments: Born To Serve The Lord; I Wouldn't Take Nothin' For My Journey Now; God Walks The Dark Hills; These Are They; What A Lovely Name; God Bless America; Looking For A City; 'Til The Storm Passes By; The Answer's On The Way; What Heaven Means To Me; I Saw The Light; We The People.

hi-res
1999 Vestal & Friends (Pamplin Records/PMCD 2058): Jesus Made A Way (with Vince Gill); Oh Happy Day (with Carman); Big Homecoming (with Jake Hess); Great Is Thy Faithfulness (with The Newsboys); Angel Band (with George Jones); Giver Of Life (with Sandi Patty and Russ Taff); You're Able (with Andrať Crouch and The Katinas); He Touched Me (with Bill and Gloria Gaither); Satisfied (with Dolly Parton); With You (with Howard Goodman); Friends (with Janet Paschal). 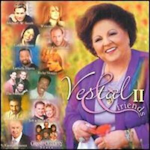 hi-res
2000 Vestal & Friends II (Pamplin Records/PMCD 2127): Stand and Testify (with The Martins); The Blood (with Cece Winans0; Jesus Hold My Hand (with Jeff & Sheri Easter); When I Think About Heaven (with Jessy Dixon); Everybody Needs Jesus (with Michael W. Smith); The Lamb Has Brought Us Home (with Larnelle Harris); Swing Down Chariot (with Wynonna); I Saw The Light (with Grand Ole Opry Stars); We The People (with Lee Greenwood); Let's All Go Down To The River (with George Younce); Know Us By Our Love (with John Elefante). 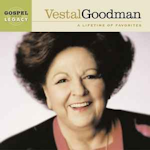 hi-res
2004 A Lifetime Of Favorites (New Haven Records/8045-2): That Sounds Like Home To Me; Wait Till You See My Brand New Home; God Walks The Dark Hills; I Wouldn't Take Nothing For My Journey Now; Who Am I; I'm Too Near Home; If God Is Dead; In The Sweet By And By; Clear Title; Mercy; God Bless America; Jesus Hold My Hand.