The Jordanaires Quartet formed in 1948, taking their name from Jordan Creek in Missouri. They also used the name “Foggy River Boys” starting around 1950 whenever they made secular recordings. By late 1952, brothers Bill and Monty Matthews, two founding members of the Jordanaires, had left the quartet. The remaining Jordanaires operated under the Foggy River Boys name until they were contractually allowed to call themselves Jordanaires around mid-1953.

Gordon Stoker joined the group to play piano in 1949. He became the group's tenor singer a couple of years later. Stoker would remain with the group until his death in 2013, sometimes alternating with the group's lead singer. The group lineup stabilized in 1954 with Stoker at tenor, Neal Matthews (no relation to Bill and Monty) singing lead, Hoyt Hawkins singing baritone, and Hugh Jarrett singing bass. Ray Walker replaced Jarrett in 1958. The Stoker, Matthews, Hawkins and Walker line-up remained together until 1982.

The Jordanaires were well-known on the gospel circuit during the 1950s, but their career took a turn in 1955 when Elvis Presley heard them sing "Peace In The Valley" on The Eddy Arnold Show. He promised to call them if he ever got a contract with a major label. Less than a year later, after Presley had signed with RCA, Stoker sang backup on a couple of Presley songs along with Ben and Brock Speer. After a few months, Stoker was called again for a session. This time, Presley made it clear that he wanted all of the Jordanaires. They sang on most of Presley's albums for the next fourteen years, also appearing with him in concert and in several of his movies.

In addition to recording with Presley, the Jordanaires sang backup on numerous hit records including Patsy Cline's "Crazy," Kenny Rogers' "Lucille" and George Jones' "He Stopped Loving Her Today." During this time, they continued to record gospel music as well. It is estimated that if all the sales of the various albums and singles they sang on were totaled, the sum would surpass eight billion.

The Jordanaires are credited as the group who originated the “Nashville Number System” where numbers rather than traditional chord symbols are used as a musical shorthand in the studio. This system is now standard in Nashville studios. The Jordanaires also helped organize unions for Nashville-based musicians.

Duane West replaced Hoyt Hawkins in 1982. The lineup would not change again until 1999 when Louis Nunley replaced West. Curtis Young replaced Neal Matthews in 2000. Matthews had been with the group for more than forty-five years.

The Jordanaires gave their final public performance in August 2012. With Gordon Stoker's death in March 2013, it was announced in Nashville's newspaper The Tennessean that the group name would be retired, bringing their sixty-five year history to a close. Gordon Stoker's son, Alan, stated, "The group is over. It was a wonderful run. My father lived a great life, and left us a great legacy.”

(Gospel and Christmas recordings only)
(Incomplete)

1953 Beautiful City (RCA Victor/LPM-3081): The Beautiful City; Stand By Me; Noah; By The River Of Life; Dry Bones; You Better Run; When They Ring Dem Golden Bells; Didn't They Crucify My Lord.

1957 Peace in the Valley (Decca Records/DL-8681): Peace In The Valley; Noah; The Church In The Wildwood; Swing Down Sweet Chariot; What A Friend We Have In Jesus; Search Me Lord; Joshua Fit The Battle Of Jericho; Rock My Soul; Roll On Jordan; Now Didn't It Rain; Lead Me To That Rock; Dig A Little Deeper. (Reissued in 1964 and 1973 as Church in the Wildwood on MCA Coral/Vocalion VL7 3854)

1958 Heavenly Spirit (Capitol Records/T-1011): Every Time I Feel The Spirit; When They All Get Together; You Better Run; Dig A Little Deeper; Search Me Lord; Workin' On A Building; When I Move; Joshua Fit De Battle Of Jericho; The Bible Tells Me So; I'm So Glad He Lifted Me; Shine On Me; I Telephoned Upstairs.

1959 Gloryland (Capitol Records/T-1167): In That Great Gettin' Up Mornin'; Look Away To Heaven; Deep River; Ezekiel Saw The Wheel; Where No One Stands Alone; This Little Light Of Mine; Shadrack; Somebody's Knockin' At Your Door; Nobody Knows The Trouble I've Seen; Walk In Jerusalem; Go Down Moses; Dip Your Fingers In Some Water. 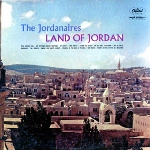 hi-res
1960 Land of Jordan (Capitol Records/ST-1311): Roll, Jordan, Roll; Let Us Break Bread Together; Sit Down Together; Same Train; I Thank You Jesus; The Old Ark's A Moverin'; One Of These Mornings; I'm A Rollin'; Swing Low, Sweet Chariot; Standin' In The Need Of Prayer; I Got Shoes; There's A Leak In This Old Building.

1961 To God Be the Glory (Capitol Records/ST-1559): How Great Thou Art; I'd Rather Have Jesus; To God Be The Glory; Nearer, My God, To Thee; Rock Of Ages; Blessed Assurance; Will The Circle Be Unbroken; Amazing Grace; Night With Ebon Pinion; Must Jesus Bear The Cross Alone; Jesus, Saviour, Pilot Me; Onward Christian Soldiers.

1964 This Land (Columbia Records/CS-9014): This Land Is Your Land; All My Trials; Little Moses; Didn't It Rain; Michael Row The Boat Ashore; Much Bigger Than I; Let Me Ride; My Valley; Going Home; Promised Land; You Better Run; The Hands Of God.

1985 Will the Circle Be Unbroken (Capitol Records/S41-56670): Will The Circle Be Unbroken; How Great Thou Art; Amazing Grace; Swing Low, Sweet Chariot; Blessed Assurance; Nearer My God To Thee; Every Time I Feel The Spirit; Rock Of Ages; Must Jesus Bear The Cross Alone.

1992 Sing Gospel (Arrival Records/30552): Turn Your Radio On; Just A Closer Walk With Thee; Will The Circle Be Unbroken; Peace In The Valley; Wings Of A Dove; Uncloudy Day; Crying In The Chapel; How Great Thou Art; Why Me Lord; Amazing Grace.

1995 Great Gospel Songs (Curb RecordsD-77810): When The Roll Is Called Up Yonder; Swing Low Sweet Chariot; When We All Get To Heaven; Sweet By And By; Power In The Blood; I Shall Not Be Moved; In The Garden; Love Lifted Me; Leaning On The Everlasting Arms; Canaan's Land.

2001 He Lifted Me (Verus Records/2259): He Lifted Me; Dip Your Fingers; Canaan’s Land; Joshua; The Sweet By And By; Swing Low Sweet Chariot; Leaning On The Everlasting Arms; Power In The Blood; You Better Run; When The Roll Is Called Up Yonder; Love Lifted Me. (Neal Matthews, Gordon Stoker; Duane West, Ray Walker).

2005 Believe… A Collection Of Blue Grass Hymns (Madacy Entertainment Group/MC2 50426) Disc 1: Nothing But The Blood; Believe; Footprints Of Jesus; Solid Rock; River Of Life; Tis So Sweet; Just A Closer Walk With Thee; It Is Well With My Soul; Standing On The Promises; What A Friend We Have In Jesus; When The Roll Is Called Up Yonder; Angel Band; I’ll Fly Away; Disc 2: Trust And Obey; Blessed; Blessed Assurance; All Hail The Power; Power In The Blood; Rock Of Ages; When We All Get To Heaven; Peace Like A River; Amazing Grace; Jesus Loves Me; Oh How I Love Jesus; Go With God; Dig A Little Deeper. (Gordon Stoker, Curtis Young; Louis Nunley; Ray Walker).